We’ve all heard the saying,”All things are possible for one who believes.”

Let me tell you the story of how my believing began.

My father, a watercolorist, was always shuttling me around with him when I was a kid as he took photos for paintings he was working on. On one of our more adventurous jaunts we headed to the Cincinnati zoo. We wove our way around to the staff entrance in his big conversion van and were met there by a beanstalk-tall woman with frizzy lion’s mane hair named Catherine. Upon greeting us she led us to an enclosed grassy area, let us in and shut the gate.  Momentarily, she returned with two squirming, spotted cougar cubs – one neatly tucked beneath each lanky arm.  She knocked open the door with a raised khaki knee and plopped those cubs in with us.  “Be back in a couple hours,” she said and loped off casually as if she left civilians alone with wild animals on a daily basis.

Dad was loading film in his camera and one of the cubs automatically spotted its dangling strap and bounded his direction on paws too big for his body.  In the ensuing hours they swatted and tumbled and gnawed on each other and on my long hair.  My dad snapped photos and I tried to stay still so as not to get pounced on.  They were awfully cute, but wasn’t this dangerous?

As the afternoon wore on, they nibbled grass and catnapped (literally) and had me giggling at their clumsiness.  Soon I began to curiously explore their little bodies with my hands, growing bolder as they grew more tired.  And just as I was starting to feel comfortable the cat lady returned and whisked them away.  “Back in a minute,” she tersely said, kicking the gate shut behind her as she went.  Dad began to pack up his camera and before he had finished, she was back.  “I have one more thing to show you.”

We followed her to a nondescript cement building where we entered a narrow, dark hallway surrounded on both sides by floor-to-ceiling fencing.  As if on cue, a regal cheetah approached the front of the cage beside us and looked up at Catherine expectantly.  She undid the latch and the cheetah glided silently out into the narrow passage and stood with us, so close that her long tail would have touched me if she flicked it.  She didn’t flick it, though.  She stood as still as a statue, her teardrop eyes trained on Catherine.  The next moments seemed to play out in slow motion for me as I experienced them through a filter of awe and fear. 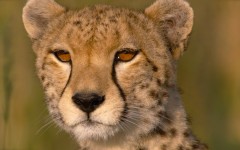 “This is Angel,” said Catherine.  She then wordlessly took Dad’s hand and placed it in front of her flat cheetah nose.  She smelled him curiously and vigorously began to lick the back of his hand.  I could hear the sandpaper roughness of her tongue resonating loudly against the cement walls and floor.  As she licked, the cat lady explained that Angel was what she called an ambassador cat.  She had spent her life in captivity and had dedicated her energies to raising money for her own endangered species by visiting schools and doing other appearances.  I could barely hear Catherine speaking; my eyes were too trained on the tongue licking dad’s hand, waiting for the teeth that peaked out to sink into his precious flesh.  I could hardly keep myself from saying something.  Maybe she didn’t know how important those hands were.  I mean, maybe she didn’t understand that without them he couldn’t paint, couldn’t make a living…..

At some point Catherine finished talking.  I honestly have no idea what else she said.  All I remember is that she sharply clicked her tongue twice and Angel abruptly stopped licking and reentered her cage.  Blurry thanks passed between the two adults, a short walk towards our van ensued and ice cream cones were gathered along the way.  I climbed up in my captain’s chair and we started home with me so dazed I didn’t even notice my melting cone.  Dad looked over at me gauging how I was, since the silence in our van was not something he was used to from his little chatterbox.   “Did you have fun?” he asked between licks.  “Yes.” I exhaled breathlessly.  Silence.  “Well,” he said slowly, “I want you to remember one thing.  Today we went to work.”  He stopped, letting that sink in.  Finally, he continued, “If you don’t love what you do this much, don’t do it.”

Yes, all things are possible for one who believes, but it helps to have someone live this out in front of us so we can experience firsthand an unbelievable life.  Then, it seems more possible to create our own.

Nelson Mandela said it best.  “Our deepest fear is not that we are inadequate. Our deepest fear is that we are powerful beyond measure. It is our light, not our darkness that most frightens us. We ask ourselves, Who am I to be brilliant, gorgeous, talented, fabulous? Actually, who are you not to be? You are a child of God. Your playing small does not serve the world. There is nothing enlightened about shrinking so that other people won’t feel insecure around you. We are all meant to shine, as children do. We were born to make manifest the glory of God that is within us. It’s not just in some of us; it’s in everyone. And as we let our own light shine, we unconsciously give other people permission to do the same. As we are liberated from our own fear, our presence automatically liberates others.”

Give someone else permission to dream big by living your life with boldness.  Remember that playing small does not serve the world.  You are a child of God.  You were made to shine.

To find out more about the Cheetah named Angel and the fund established in her name, click here.

View all posts by Misty Tolle